Once the authority has seized the vehicles the DVLA are notified and the owner has to pay fees including taxing the vehicle before it can be released.

The vehicle owner also has to prove that they own that vehicle. If they do not do this within seven days the council will receive notification from the DVLA to destroy or dispose of the vehicle.

Mayor Andy Preston said the action would send out a strong message to both law-abiding and law-breaking residents that any criminality in the community would not be accepted.

He said: “This kind of operation on top of other action such as selective landlord licensing, house closure orders and anti-social behaviour orders are all designed to make it clear we will not accept law-breaking full stop.

“North Ormesby is a great community but it does have issues with people who would bring it down so we will use all the powers we have to stamp out bad behaviour.”

Vehicle tax evasion is against the law and while over 98% of vehicles are taxed correctly, a small minority of vehicle keepers continue to break the law.

It costs HM Treasury £94 million every year, vital funds which would otherwise go towards public services so it’s important to catch tax evaders.

Police services can also be given devolved powers, including the ability to remove untaxed vehicles from the road under the same process as local authorities. 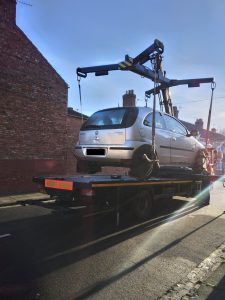