It aims to promote 20mph speed limits as the norm in places where people mix with traffic, by garnering policy commitments at national and local levels and generating local support. WHO says 20mph speed limits create safe, healthy, green and liveable cities – and ahead of the event is calling on people to sign an open letter and add their voice to the “growing global movement” demanding 20mph streets.

The letter reads: “Low speed streets save lives and are the heart of any community. 30km/h (20mph) speed limits where people and traffic mix make for streets that are healthy, green and liveable, in other words, streets for life.

“Join the #Love30 campaign to call for 30km/h speed limits to be the norm for cities, towns and villages worldwide.”

WHO has also published a campaign toolkit, which includes social media templates and infographics, a poster campaign and a factsheet. 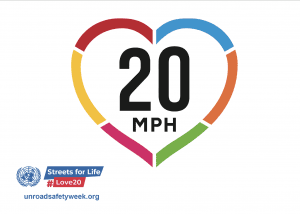