‘Be the mate who won’t speed’, young drivers urged

A new THINK! campaign urges young drivers on essential journeys to ‘be the mate who won’t speed’ to keep themselves and others safe on the road, and help reduce pressure on the NHS.

The new campaign, which is part of the THINK! Mates Matter strategy, will use social media assets, influencers and a partnership with LADbible to ‘normalise and champion’ positive behaviours, and radio and digital audio ads to deliver ‘in the moment’ interventions.

Statistics show there was a sharp increase in the proportion of cars speeding during the UK’s first national lockdown in March/April 2020. While compliance rates returned to 2019 levels during the summer months, there are concerns that with lockdown restrictions back in place, speeding could creep back up to peak levels as drivers take advantage of quieter roads. 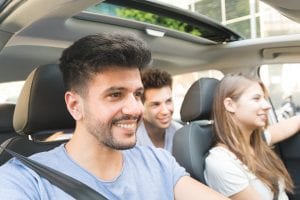 With darker mornings and evenings, and lower temperatures, creating potentially treacherous conditions during the current national lockdown, the new THINK! campaign urges young drivers to rethink the excuses they make for speeding – such as being in a hurry or driving on roads they think they know well.