Drivers have been warned against the dangers of tailgating amid concerns that ‘huge numbers’ are failing to follow ‘basic safety rules’ on the country’s busiest roads.

The Highway Code tells drivers to allow at least a two-second gap between themselves and the vehicle in front on roads carrying faster-moving traffic and in tunnels where visibility is reduced.

Furthermore, the gap should be at least doubled on wet roads and increased still further on icy roads.

A survey carried out by National Highways found that eight in 10 people said they were aware of the ‘two-second rule’ – while 75% said they had not driven too close to the vehicle in front within the previous three months.

However, a recent trial of new tailgating cameras on a stretch of the M1 captured 60,343 incidents of vehicles driving too close, in just one year.

The trial, carried out in partnership with Northamptonshire Police, also found there were 10,994 repeat offenders. 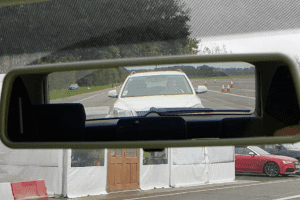