Well done to the five individuals who received UKROEd awards from our Chief Operations Officer Ruth Purdie at our Conference in Manchester on Tuesday 3 December! It was the first time we have included an awards ceremony as part of the Conference – so these awards are particularly special! 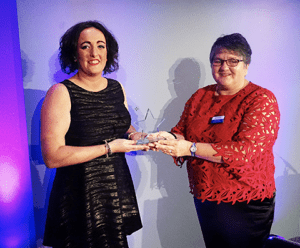 Gemma supports the Roads Policing Team involved in the deployment of services to meet KSI data. The service she provides is “Real time and Always on point”. She provides a personalised service that is both proactive whilst always aspiring to offering a solution or a resolution before an issue or disruption occurs.

Taking personal responsibility with confidence and with tenacity, adaptability, attentiveness, and a desire to learn.  She shows true professionalism, an ability to respond quickly and excellent time management skills – all the skills that are essential to Gemma’s role and the excellent service she provides for CREST, the Constabulary and external customers.

2. Outstanding contribution to Training within the NDORS Scheme: 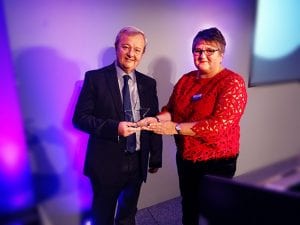 Dave Dawson is one of the few remaining original NDORS speed awareness trainers since the inception of the Northumbria scheme in 2005.

Since that time Dave has delivered courses to over 37,000 clients and has an incredibly professional, helpful and passionate approach to his work.

Dave cares deeply about the potential to reduce harm on our roads. He helps others to improve not only their driving but, also their mindsets regarding driving. He is the ultimate team player, held in the highest regard by his peers.

He is the kind of person who always steps in to support colleagues when necessary. For example, he has assisted several newer trainers to deal effectively with clients and has often headed to a venue on his day off to support people who are having difficulties.  It is fair to say Dave is always prepared to go the extra mile.

Dave also believes in the importance of the client journey, quality of training and the overall experience of clients when attending speed awareness courses. He feels that every satisfied client has the potential to drive differently and save lives.

Despite being one of the longest serving trainers, he maintains the highest standards of delivery, consistently receiving positive feedback from internal coaches. He was also praised for a superb course delivery by NDORS on his last assessment.

It is fitting to recognise his huge contribution this year as Dave now wants to spend more time with his family and has this month decided to retire. He will be sorely missed by his colleagues. He has played a significant role in the evolution of this industry as a trainer, whilst also influencing the client experience on a strategic level. 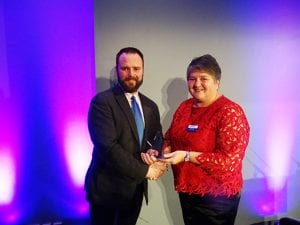 In 2018 Derbyshire suffered considerable loss of life with Collisions in the county of Derbyshire, 11 of which were motorcyclists. When you take into account they form only 1% of the road users this was an astronomically high percentage. A new idea was needed!

Tom Rowlands states, “We are firm believers that prevention is better than the Cure” hence the hope that more riders take up the advanced riding lessons available. By being out and about in the community, highly visible, we are hoping to spread this message and facilitate that for riders.

The aim of UpRight is to encourage less-experienced or returning to biking riders to join road safety organisations such as RoSPA and Institute of Advanced Motorists (IAM), undertake Certificate of Basic Training+ (CBT+) or to attend the Enhanced Riding Scheme (ERS) run by a select few riding schools in Derbyshire. UpRight are looking to achieve engagement, encouragement and to educate riders and through interaction with them to develop and upskill themselves, and aim for a greater awareness to the dangers of riding.

By educating motorcyclists about the importance of being seen on the road, as well as giving them a basic knowledge of trauma care and accident scene management, we aim to reduce the number of fatal and serious collisions on our roads, as well as giving people the best possible chance of survival. 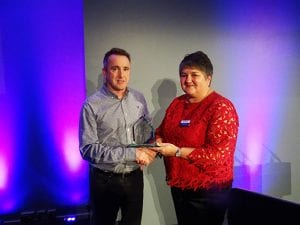 Steve is fully committed to the concept that first contact with the customer is the start of their learning process and their journey to drive more safely. He believes that every hurdle, problem or frustration is a learning block that can impede their behavioural change.

Steve started working for DriveTech 12 years ago as a call handler, where he gained extensive experience of handling customer queries first-hand.  His talents in problem-solving were recognised and his career started to progress, firstly moving to course bookings, then through project support and account management to team leader and more recently has been promoted to national operations manager and is the product owner of DriveTech’s police systems.

Steve was DriveTech’s lead on the development of the online learning platform for seatbelt and cycling offences.  As usual, he surpassed his normal role requirements and was able to offer guidance about areas of the course navigation that could cause issues for customers which resulted in changes being made.

UKROEd is delighted to present this award to Des Morrison on behalf of Steve Ryan. 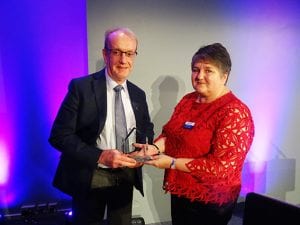 Ian Powell joined Hertfordshire County Council in 1976 and has been commended for the way he has helped the county maintain its proactive response to road safety over the last four decades.

Ian’s first post was road safety officer for the East Herts area where his duties ranged from promoting the Green Cross Code to primary years pupils, to pre-driver and secondary educational projects. In his early years he featured in a film called ‘A Matter of Attitude’, which showed him conducting a cycling proficiency course to highlight the differing attitudes of road users towards each other – still a very relevant issue today. In 1986 Hertfordshire became the first county to promote the use of car seats for children. With the help of sponsorship from local businesses, arranged by Ian, 500 seats were donated to three of the county’s maternity units.

Ian met Princess Diana when she launched the scheme at the QE11 hospital in Welwyn Garden City – and shortly after this it became a legal requirement to use a child car seat.  In the early 1990s he established the county’s first ‘driver training team’ which delivered driver and management programmes for individuals and businesses.

Ian became the Institute of Road Safety Officers’ (IRSO) contact for driver training and represented IRSO (now Road Safety GB Academy) on the first ‘Pass Plus’ board, helping achieve an initial take-up rate of 11%.  After 15 years of membership, Ian became an IRSO ‘Fellow’ and sat on its safety advisory panel for 10 years, helping councils and businesses manage their occupational driver safety schemes and policies.

In 1996 Hertfordshire became the third county in the UK to introduce driver retraining courses. Ian was a founder member of ANDISP (Association of National Driver Intervention Service Providers), subsequently renamed NADIP (National Association of Driver Intervention Providers). After 6 years as NADIP Chair, Ian will be standing down in March 2019.

His dedication and passion for road safety is applauded by all in his profession and UKROEd is truly honoured to present this award to Ian Powell.