The Government has conceded Britain is in a period when road fatality numbers are stable, despite publishing figures showing a 2% fall in 2019. The provisional estimates for 2019, published by the DfT on 30 July, show 1,748 people were killed on roads in Great Britain last year – down from the 1,784 reported in 2018.

However, the Government admits this small decrease may be due to natural variation – adding that the trend in the number of fatalities has been broadly flat since 2010. The stats also show there were 153,315 casualties of all severities in reported road traffic collisions in 2019. This is 5% lower than in 2018 and is the lowest level since 1979. Meanwhile, there were 25,975 seriously injured casualties.

This figure is not comparable to earlier years due to changes in severity reporting. 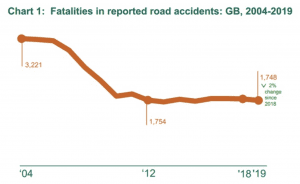