A campaign to highlight the dangers of using a mobile phone at the wheel launched in South Yorkshire recently.  South Yorkshire Safer Roads Partnership (SYSRP) is running the campaign using digital billboards and a new Instagram video urging drivers: ‘In the car – put your phone away’.

The SYSRP campaign is in support of a national mobile phone campaign being co-ordinated by the National Police Chiefs’ Council, which started with communications activity on 7 February, followed by an increased focus on enforcement.

SYRSP says using a handheld mobile phone makes a driver four times more likely to be killed or seriously injured in a road traffic collision– with 17-24-year-old males most at risk.

Joanne Wehrle, SYSRP manager, said: “It’s absolutely vital that we continue to emphasise the dangers of being distracted by a mobile phone while in the car.

“We will be asking drivers to think about whether a text or call is really worth the points, their licence, job or even their life?

“Our message is simple – in the car, put your phone away. Use the glove box, put it on silent or out of reach – and remember it is still illegal to use your mobile while stopped at traffic lights or in queueing traffic.”

The current law states it is illegal to use a handheld mobile when driving including using a handheld phone to follow a map, read a text or check social media. While using a hands-free device – for example, for navigation – is not illegal, SYRSP points out that if this affects the ability to drive safely, a driver can still be prosecuted by the police. 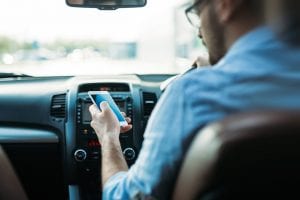