Reduced speed limits, more warning signs, non-slip road surfaces and Highway Code amendments, together with more safe places to cross and improved off-road equestrian routes are amongst the actions being requested to make roads safer for the UK’s 1.8 million equestrians. The call comes following the UK’s biggest ever* equestrian road safety study, which was funded by the Department for Transport (DfT) and commissioned by The British Horse Society (BHS), which revealed alarming levels of risk and stress, on top of the most recent death and casualty statistics that show that ** 46 horses have died and 118 humans have been injured. 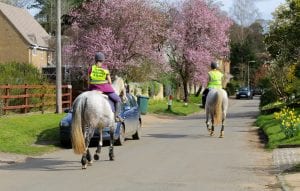 The DfT/BHS survey involved over 7,000 participants – with ages ranging from 18 to 97 and with an average of 35 years’ equine experience. Only 3% of equestrians never felt stressed or anxious when using roads with their horses and 43% did so more than half the time. On 93% of occasions this was due to the behaviour of other road users with speeding, road rage and passing too close being commonly reported problems.

On another 62% of occasions the physical characteristics of the road (such as blind corners, the speed limit, poor surfaces or overgrown vegetation) contributed to this stress or anxiety. 78% of equestrians said they had experienced an incident while using roads with their horse (the majority experiencing more than 10) that they did not officially report, with only 31% having previously reported to the police and/or the BHS. 322 equestrians (4.5%) said they had been involved in a road incident in the previous year that resulted in injury to either a person or an animal; 59% occurred when they were riding or handling a horse as opposed to using other forms of transport. The BHS is asking motorists, and particularly learner drivers, to be more mindful of equestrians on the road and support has already been secured from the leading driving instructor publisher Intelligent Instructor.

Their founder, Richard Storrs said: “We have been working with The BHS for a number of years now to help driving instructors educate learners about safe behaviour when near or passing horses. We have heard reports of some horrendous cases of lost lives – both human and equine – which could have been avoided had people behaved differently. For that reason, The BHS recently attended our national conference and we will continue to work with the safety team there to promote this critical area of road safety.”

BHS Director of Safety Alan Hiscox commented: “This study has unearthed a number of truly shocking statistics and facts which will hopefully now drive action. We need more innovation around safety and an upweighting of education for motorists as well as Highway Code amendments. And, ultimately, we need behavioural change from anyone currently using the roads who is not following best practice around safety and consideration for other road users.”

*The study was conducted by Dr Dee Pollard and involved four elements of research: a review of existing published DfT and BHS data, a survey among 6,000 equestrians from October 2020 looking at how frequently equestrians used roads and off-road routes with their horses and what influenced their ability to do so, qualitative work – focus groups and interviews, which in turn informed a second quantitative survey focusing on road safety in the summer of 2021 which generated 7,124 responses.