A road safety group is calling for the Government to ‘make up its mind now’ on whether e-scooters have a role to play in the future transport mix. The plea comes on the back of statistics which show there were 484 casualties in collisions involving e-scooters in 2020, of which 384 were e-scooters users.

This included one fatality. Regulations allowing trials of rental e-scooters on UK roads came into effect in July 2020. The move was fast-tracked in light of Covid-19 and social distancing regulations, which meant people needed to get around without resorting to buses and trains.

The trials were initially due to last for a year – but have been extended until March 2022.

IAM RoadSmart has criticised the extension, saying the Government has ‘taken far too long’ to review the status of e-scooters.

Neil Greig, director of policy and research at IAM RoadSmart, said: “By delaying yet again the results of the pilot schemes we have another Christmas looming where people will be buying and using a totally unregulated form of transport in the UK.

“The pilots were launched in July 2020 and are now not due to finish until March 2022, plus the time required after that for analysis and legislation – this has taken far too long in our opinion.

“In the meantime, the police should make it absolutely clear that anyone caught riding an e-scooter outside private land or a trial area will have their vehicle seized immediately.

“E-scooters may have a role to play in the future transport mix, but this can only happen once their legal status has been made completely clear and that cannot happen soon enough.” 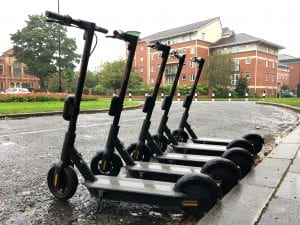