The government plans to close a legal loophole that has allowed drivers who use mobile phones to film or take photographs to escape prosecution. It is illegal for drivers to call or text on hand-held phones but some have dodged punishment for taking photos.

In July, a driver overturned a conviction for filming a crash, saying he was not using his phone “to communicate”.

The government aims to revise the laws to also include browsing the internet and searching playlists while driving. It says the current legislation has fallen behind advances in smartphone technology. 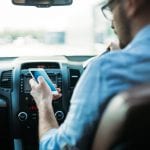