Uninsured drivers are being threatened with increased enforcement activity this month – as police forces look to crackdown on an offence which causes a ‘disproportionately high level’ of fatalities.

Figures published by the Motor Insurers’ Bureau (MIB) show around 130 people are killed by an uninsured driver each year – with more than 26,000 personal injuries recorded in 2018, according to Road Safety GB

The MIB says one contributing factor behind the ‘concerning rate of collisions’ is that uninsured drivers aren’t motivated to drive legally and help keep policy costs down.

‘Operation Drive Insured’, organised by the MIB in partnership with the National Police Chiefs’ Council (NPCC), will see officers in England, Wales and Northern Ireland step up efforts to seize uninsured vehicles. 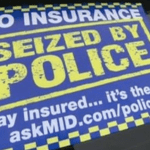