The Welsh Government has made plans to reduce the national default speed limit from 30mph to 20mph on residential roads and busy pedestrian streets a legislative priority for this year.

Ministers in Wales have long wanted it to become the first country in the UK to introduce the change and in February 2021, announced trials will take place in eight pilot areas.

The trials will get underway this summer and come ahead of the planned national rollout for April 2023. In order to develop a best practice approach, the Welsh Government has also launched a consultation for people to have their say on the change before the necessary legislation is laid.

The consultation will run for 12 weeks and come to an end on 30 September. The Welsh Government hopes the introduction of a default 20mph limit will play an ‘instrumental role’ in helping to save lives, protect communities and improve quality of life for everyone.

Lee Waters, deputy minister for climate change, said: “Making 20mph the default speed limit on busy pedestrian streets and in residential areas across Wales is a bold step that brings about significant benefits.

“Not only does it save lives, but it also helps to make our streets a safer and more welcoming place for cyclists and pedestrians, has a positive outcome for our physical and mental wellbeing and with fewer vehicles on the road helps create a positive impact on the environment.

“We know this move won’t be easy – it’s as much about changing hearts and minds as it is about hard enforcement – but over time 20mph will become the norm just like the restrictions we’ve introduced before on carrier bag change, smoking inside businesses and organ donation.” 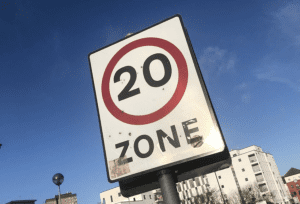