An intoxicated man decided to ride his scooter along the Aston Expressway A38(M) after a night out.

The unnamed reveller found a novel but dangerous way to get home after his Saturday night in Birmingham, police said.

Central Motorway Police Group said he was intoxicated. Scooters should never be on the motorway network, they said, and the man had been stopped and reported. 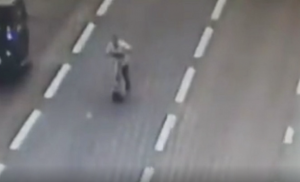