The law on people using their mobile phones while driving in Great Britain has become stricter. Here are the details:

The law is being updated to keep up with technology. Since 2003, mobile devices have become capable of performing many more tasks beyond ‘interactive communication’. They are used to play music and games, take photos or videos, or scroll through articles. The Government said, the “array of functions that mobile phones can now perform has outgrown the wording of the offence and its parameters”.

The perceived need for a law change has been highlighted by recent court cases, particularly that of DPP Vs Barreto in 2019. In that case, a driver who was filming a nearby road collision while at the wheel was found not guilty because he was not using a hand-held mobile phone for ‘interactive communication’. The judge said he was therefore out of the scope of this offence.

Department for Transport statistics illustrate the danger. In 2020, 17 people were killed, 114 people were seriously injured, and 385 were slightly injured in road traffic accidents in Great Britain where the driver was using a mobile phone. Just over 80% of the 423 respondents to the consultation agreed with the Government’s proposal to expand the offence to cover uses beyond ‘interactive communication’.

The new law will amend the 1986 Regulations. This will mean the offence is triggered whenever a driver holds and uses a device, regardless of why they are holding it.

The meaning of ‘using’ a phone will be expanded to cover the following:

There is a new exemption. As well as an existing exemption which allows a driver to use a phone in emergencies, the new law creates an exemption permitting drivers to hold and use a device while driving to make a contactless payment. Using a mobile phone for navigation will continue to be legal. However, the phone needs to be kept in a cradle and not in the driver’s hand. 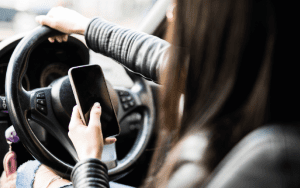