Transport for London (TfL) will be introducing a new 20mph speed limit across five miles of the capital’s roads within the Congestion Charging Zone from today (Monday March 2).

Speed is a factor in around 37% of collisions in London where a person dies or is seriously injured, which is why reducing the speed limit is key to the Mayor’s Vision Zero commitment to eliminate death and serious injury from London’s transport network, says TfL.

The Mayor of London, Sadiq Khan, said: “I am absolutely determined to do everything I can to eradicate all deaths and serious injuries on London’s roads and these new measures are a vital step along the way to helping us to achieve this.

“By cutting speed limits on TfL’s roads within the Congestion Zone we are saving lives, while at the same time making our streets more appealing for Londoners to walk and cycle around the capital.” 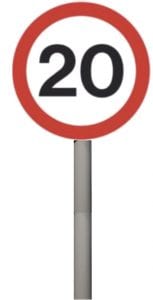