A new ‘radar activated road sign’ has been launched in a bid to reduce collisions and casualties involving motorcyclists.

DfT figures show that in 2018, 354 motorcyclists were killed on roads across Great Britain – an increase from 2017.

Of the 16,700 powered two wheeler rider casualties recorded in total, 228 occurred due to ‘inadequate or masked signs or road markings’ or the layout of the road – including tight bends and blind corners.

In a bid to combat this, new crash site signage has been launched, which provides a safety alert to motorists and motorcyclists, indicating a known hazardous area.

When a motorcyclist approaches the sign at a speed over the limit, a ‘THINK’ motorcyclist symbol will illuminate, along with white LED text reading ‘BACK OFF’. 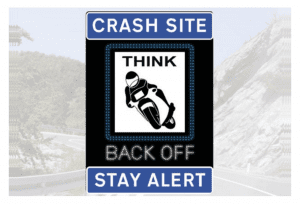