We are delighted to announce that our Chief Executive Ruth Purdie has been awarded an OBE in the Queen’s New Year Honours 2021.

Ruth served as a police officer for 30 years. She rose to the rank of Chief Superintendent with North Wales Police, before her appointment in 2010 to Assistant Chief Constable in Cheshire Constabulary.

Her passion for roads policing and road safety continued after her retirement in 2014 with her appointment to General Secretary for TISPOL, a European Police network funded by the European Commission and focussed on delivering initiatives to reduce numbers of road deaths and injuries.

Throughout this time, Ruth worked tirelessly to improve road safety. One TISPOL initiative, Project EDWARD (Every Day Without A Road Death), encouraged many nations to join together to co-ordinate policing and educational activities to combat poor and dangerous driving on one September day each year. The aim was not to have a single death across Europe on that day.

This project grabbed significant traction across social media platforms (with almost 20 million hits on the website) and trended top five in the UK and top 50 globally.

In 2018, Ruth joined UKROEd as Chief Operating Officer to lead on the management and administration of the National Driver Offender Retraining Scheme on behalf of the police service. NDORS delivers more than 1.4 million driver awareness courses for road traffic offences each year, helping to improve driver knowledge and behaviour.

Ruth was appointed UKROEd’s interim Chief Executive in 2019; this was made permanent late in 2020.

UKROEd Chair Suzette Davenport said: “We are thrilled for Ruth, who works tirelessly with a level of self-motivation which is truly exceptional when it comes to matters of road safety. She is the ultimate professional who impacts positively on everyone she meets.”

Ruth (pictured below) told us she was truly honoured and delighted to receive this recognition. “It places value and recognition on road safety, an area that I am extremely passionate about and I am very fortunate to work with others who feel the same way,” she said.

“This award also recognises the support they give and the passion they show to make a difference.” 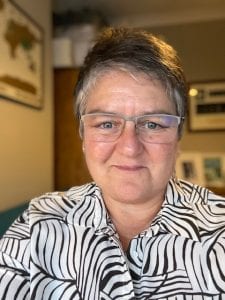