TfL has announced that 18 pedestrian crossings will be programmed to show a continuous green signal to pedestrians, until traffic approaches, to prioritise people walking.

The ‘Green Person Authority’ traffic signals are designed to make it easier for people to cross the road – and are part of the Capital’s drive to be ‘the world’s most walkable city’. They have already been installed at seven locations in Tower Hamlets, Newham, Hounslow, Richmond and Hillingdon – and will be installed at a further 11 locations over the coming weeks.

TfL says a number of factors have influenced the signal locations, including high pedestrian flow, proximity to pedestrian destinations such as shopping centres, stations and schools, and suitability of existing technology. The organisation states it will continue to identify new locations where these crossings can be introduced, with the aim of increasing their number over the coming years.

Will Norman, London’s walking and cycling commissioner, said: “Walking has so many benefits – it doesn’t just enable us to get from A to B, but also improves our mental and physical health.

“We know that safety is a key concern for people walking around London, and giving pedestrians priority is a powerful way of putting them first and making it easier to cross London’s roads.” 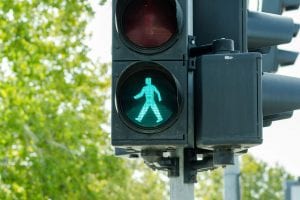