A member of the House of Lords is calling for cyclists and e-scooter riders to be prosecuted for the offence of using a phone, in the same way that car drivers are. First reported by BBC News, Baroness McIntosh of Pickering wants a law change following an incident with a cyclist which took place near parliament.

Baroness Pickering recalls that she was crossing the road when she suddenly became aware of a cyclist travelling towards her using a mobile phone, “one hand bicycling, one hand on the mobile phone, on the wrong side of the road”.

She added: “I wasn’t clear whether he was going to stop or not.” 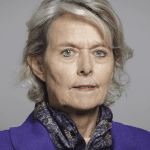 Baroness Pickering says some cyclists and riders of e-scooters and e-bikes and were using mobile phones “inappropriately” and challenged the DfT on why it had not addressed the issue. The former tory minister said e-scooters were “even more of a concern” with some people left feeling “absolutely terrorised” by those using them “irresponsibly”.

Responding to the issue, roads minister Baroness Vere said while there is no specific offence for a cyclist using a phone, cyclists can be prosecuted for careless or dangerous cycling.