Project EDWARD – Every Day Without A Road Death – will be sweeping through England, Scotland, Wales and Northern Ireland this week with five days of events to promote road safety.

Project EDWARD is backed by government, the emergency services, highways agencies, road safety organisations and British businesses and promotes an evidence-led, ‘safe system’ approach – the long-term objective of which is a road traffic system free from death and serious injury. Road Trip Over the five days, three electric cars will be driven on different routes starting from Dundee and Cambridgeshire to The Midlands; and from Plymouth through the West Country to Wales, with the drivers pitting their skills against each other to deliver the most economical and environmental journey. Drivers will also showcase the best examples of safe road planning, post-crash response, design and engineering.

The three road trips will visit sites involved in the campaign along the way, including stops at:

• Devon Air Ambulance, where a convoy of emergency service vehicles will accompany the Project EDWARD vehicle and results from the Air Ambulance’s recent life-saving missions will be shared

• The New Forest, where the Project EDWARD crew will briefly swap four wheels for four legs as they consider the safety of horses and riders

• Sussex, where police officers will be on hand to talk about Operation Close Pass – an initiative to promote safety for cyclists and other vulnerable road users.

The team will also be engaging with Community Speed Watch groups, and visiting depots of large transport fleets including Waitrose and Royal Mail. Other stopping-off points will be at local authorities that have adopted the “Safe System” approach to tackling road risk.

All 43 police forces in England and Wales, as well as Police Scotland and the Police Service of Northern Ireland, are participating in this 24-hour operation, starting at 0700 on Wednesday 15 September, to encourage compliance with speed limits.

Kent County Council is launching its ambitious “Vision Zero” road safety strategy aiming for zero fatalities on the county’s roads by 2050. HRH Prince Michael of Kent, the patron for Towards Zero Foundation, will speak at a press conference alongside Baroness Vere, Minister for Roads. The event will feature demonstrations of vehicle safety technologies such as Autonomous Emergency Braking which have great potential to help commercial vehicles including vans, buses and HGVs avoid collisions.

HRH Prince Michael of Kent says: “Project EDWARD continues to raise the profile of road safety, in particular the Safe System. Coming together in this way to highlight new road safety measures is innovative. I wish the team well for the forthcoming week of action here in the UK. It will be a significant example of what can be done to reduce risks for road users over the world.”

Baroness Vere, Parliamentary Under-Secretary of State, says: “I am delighted to support this brilliant initiative to promote safety on our roads. While we know that the UK has some of the safest roads in the world, each life cut short on them is a tragedy and many deaths are sadly preventable. “As we come out of the pandemic, we have an opportunity to redouble our efforts and I will continue to do everything I can to make our roads safer for everyone.”

Project EDWARD this year is managed by RoadSafe in partnership with Driving for Better Business, a government-backed programme to help employers in the private and public sectors reduce work-related road risk, protecting staff who drive or ride for work, and others who they may share the road with.

The initiative is backed by most of the police forces in England and Wales as well as Police Scotland and the Police Service of Northern Ireland (PSNI) with Highways England, the National Police Chiefs Council (NPCC), the National Roads Policing Operations and Intelligence (NRPOI) and the Association for Road Risk Management also actively participating.

“Our road trips will be stopping at multiple locations each day to share exciting content, knowledge, interviews and stories all linked to keeping those who drive for work safe.

“We will be looking at Safer Drivers, Safer Vehicles, Safer Journeys and Driver Wellbeing as well as how best to manage those who drive for work in order to reduce risk, control costs and improve efficiency. Our aim is to provide a platform that showcases some of the best work being done around the country.”

Chief Constable Jo Shiner of Sussex Police says: “I am fully supportive of this first National Safe Speeds Day and I welcome the efforts by members of the Project EDWARD team to highlight the benefits for all road users of understanding and choosing speeds that are legal and safe.

“For a 24-hour period starting at 0700 on Wednesday 15 September police officers all over the UK will step up their efforts to encourage compliance with speed limits, because we know lower speeds mean fewer road deaths.” 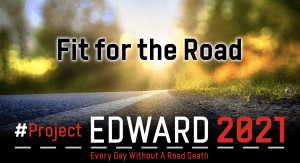