Brake says there is no excuse for breaking the speed limit, on the back of a survey in which approximately a fifth of drivers admitted to travelling at more than 100mph on a public road. The survey findings, which garnered the views of more than 2,000 UK drivers, have been released to mark the start of Road Safety Week 2020.

Established by Brake more than 20 years ago, Road Safety Week seeks to raise public awareness of road safety issues and is intended to act as ‘the driver for positive change on UK roads’. During Road Safety Week 2020, which takes place between 16-22 November, Brake is raising awareness of the dangers of excessive speeds, using the slogan ‘no need to speed’.

It is also highlighting to the UK’s ‘majority of law-abiding drivers’ that in many conditions, such as in the wet or near cyclists and pedestrians, even driving within the speed limit can be too fast. In total, 18% of the survey’s respondents admitted to speeding at more than 100mph on a public road – something which was more prevalent among male drivers (28%) than females (9%). The figure rises to 33% among 25-34 year old drivers.

In partnership with police forces, Brake has also revealed data on the highest speeds over the limits in different police force areas.  The highest excess speed was 152 mph in a 30mph zone, recorded by the Metropolitan Police, while the highest speed overall was 180mph, captured by Nottinghamshire Police in a 70mph zone. Drivers caught exceeding 100mph on public roads face a driving ban of up to eight weeks, and a fine of 150% of their weekly income. 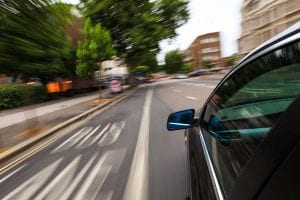