New figures show that the number of casualties on Scotland’s roads fell to a record low in 2019 – despite a small rise in fatalities. Finalised figures for 2019, published on 28 October, show there were 165 road deaths – up from 161 in 2018.

Despite the 2% increase, the Scottish Government says the number of people killed is still at a ‘historically low level’ – with the figure for 2019 below the average for the previous five years. However, the figures show a ‘significant drop’ in the overall number of casualties, which fell by 9% from 8,424 to 7,638. This represents the lowest number since records began.

In terms of age, there were 763 child casualties in 2019, an increase of 1% since 2018. This included two fatalities and 198 children who were seriously injured.

Michael Matheson, cabinet secretary for transport, said: “Overall road casualties on Scotland’s roads remain at their lowest levels since records began. Sadly, it remains the case that from this lower total number of casualties, more people have died on Scotland’s roads compared to last year.

“Whilst we are on track to exceed our reduction target for fatal collisions, this offers no comfort to the friends and family of those who have tragically lost their lives.”

Mark Ruskell MSP said: “The Scottish Government must take action to stop people being injured or killed on our roads. “Since rejecting my Bill, which was a cheap and straightforward way to save lives, the transport secretary has failed to bring forward any proposals of his own.

“Meanwhile, Wales is introducing 20mph limits on every residential street by 2023 and Borders Council who were initially sceptical are now backing 20mph everywhere.

“Faced with these stark figures, I urge Mr Matheson to urgently reconsider his opposition to my life saving proposal.” 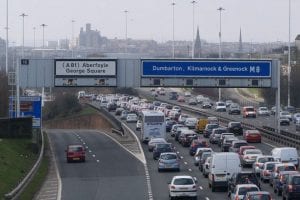