The mother of a young driver who died in a high-speed collision has backed a Scottish Government and Road Safety Scotland campaign which encourages young male drivers to adopt safer driving habits. First launched in 2019, the #DriveSmart campaign features a series of larger than life, relatable ‘gran’ characters, who unexpectedly appear while their grandsons are driving.

The ads highlight a number of humorous scenarios – with the grans addressing unsafe driving behaviours including distractions and speeding, with the strapline – ‘Drive like gran’s in the car. #DriveSmart.’ Campaign research highlights that young male drivers change their driving behaviour depending on who they have as a passenger in the car. They claim to drive better when they are carrying ‘precious cargo’ like their gran.

The campaign is being backed by Lorraine Robertson, from Inverness, who has spoken out about the devastating crash which claimed the life of her son Kyle, in a bid to make other young drivers re-evaluate their driving behaviour.

Lorraine said: “Kyle was just the most placid, happy go lucky boy you could meet. He loved life and loved his family and when he came into a room, he made the whole room smile. 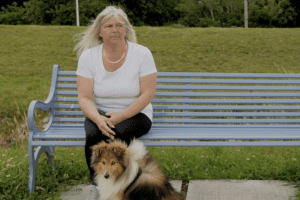 “From the day we lost Kyle it’s actually been hard to live. From hurt, to panic, to upset, to anger, you go through it all. I want to urge young drivers to take that second to think about what they’re doing on the roads, because what you leave behind is carnage and devastation.”

Latest provisional figures reveal 925 young male drivers were involved in collisions in Scotland during the last 12 months, with 148 killed or seriously injured.

Graeme Dey, minister for transport, said: “Every life lost on our roads is one too many and the #DriveSmart campaign aims to help keep young drivers and everyone who uses our roads safe.

“We know that some young drivers are often prone to over-confidence in their abilities, a misplaced sense of control and a desire to push themselves and their car to the limits. They may get away with it some of the time, but the casualty numbers show that isn’t the case all of the time, and the consequences of this can be devastating.

“We want every driver in Scotland, and particularly young men, to consider their actions and drive at an appropriate speed for the road conditions and realise that they aren’t invincible.”

The campaign will be supported with advertising in TV, on demand platforms, cinema, digital PR and social media, outdoor and radio advertising.