TfL says an initiative to protect vulnerable road users from the most dangerous heavy goods vehicles is helping to save lives and prevent life-changing injuries. Data shows there were 17 serious injuries caused by collisions involving HGVs in London during 2021 – down 64% from 48 in 2017.

TfL has attributed the fall to Direct Vision Standard, its ‘pioneering’ HGV safety scheme. Under the scheme, HGVs are given a rating between ‘zero-star’ (lowest) and ‘five-star’ (highest) – based on how much the driver can see directly through their cab windows.

Only vehicles with a valid safety permit – those rated ‘one-star’ and above – have been able to operate in London since March 2021. The operators of lorries rated zero-star are required to fit safe systems in order to obtain a permit.

TfL says 191,769 safety permits have been issued, including nearly 5,000 to five-star vehicles. Meanwhile more than 112,000 zero-star HGVs have now had safe systems fitted. These include: ‘High quality’ mirrors and side guards Cameras covering blind spots linked to an in-cab display An audible warning when turning left Motion sensors covering the sides of the HGV at low speeds A prominent warning on the back of their vehicle

Christina Calderato, TfL’s director of transport strategy and policy, said: “In its first year of enforcement, our world-first Direct Vision Standard has helped to dramatically improve the safety of lorries and save lives.

“We are delighted that nearly 200,000 permits have been issued and want to thank all of the freight operators who have led the way in ensuring they only operate the safest lorries in London and across the UK.” 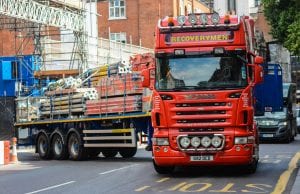