Road safety organisation GEM Motoring Assist is urging drivers to take extra care in areas where deer are common. The rutting (or breeding) season means deer are more mobile than usual, bringing them onto roads and increasing the risk of collisions.

GEM chief executive Neil Worth says: “We encourage drivers to be extra observant, but we recommend that you ‘don’t veer for a deer’, purely because of the risks that go with a sudden change of direction while driving.

“Periods of highest deer activity tend to occur at dawn and dusk, coinciding with the morning and evening rush hour, increasing collision risks in areas where deer are common.”

Experts believe the UK deer population numbers more than two million, and research from the RSPCA shows around 75,000 deer are involved in vehicle collisions each year, with 10,000 killed instantly.

The human death toll from deer collisions ranges between 10 and 20 annually, while industry estimates put the cost of damage to vehicles alone to be at least £11 million.

But it’s not only deer drivers should be looking out for. In some regions, such as the Forest of Dean, collisions with wild boar have exceed those involving deer.

Although wild boar became extinct in the UK nearly 400 years ago, they are now back in some parts of the country. The UK is home to an estimated wild boar population of 2,600 or more. Around 500 die in the Forest of Dean each year, either through culling by marksmen or as a result of a road collision.

Wild boar can reach 150kg in weight, meaning a collision could have severe consequences both for boar and vehicle.  The animals can be seen in daylight hours, but they usually come out after dark, adding to the collision risk.

What should you do if a deer jumps out in front of you?

If you spot a deer or other animal on the road ahead, stay in control, reduce your speed as much as possible and steer straight. Don’t veer for deer. By changing your direction quickly, you increase the risk of losing control, running off the carriageway and rolling your vehicle. This increases the likelihood of sustaining greater damage to your vehicle and serious injury.

What can I do to avoid hitting a deer?

If you’re on an area where you can expect deer, scan the ditches and not just the road ahead of you. You may spot deer or other wildlife approaching the road and be able to take precautions. Where you see one deer, expect more. Slow down. The slower you go, the more time you have to react should you encounter any wildlife on the roadway. Watch for glowing eyes at night.

What time of year is most common for vehicle collisions with deer?

From year to year, statistics show that collisions are consistently higher from now (mid October) into December.

What time of day are collisions with deer most common?

Dusk and dawn are the most common times of day for deer to be on the move, but they can actually appear on the road or roadside at any time of day or night. 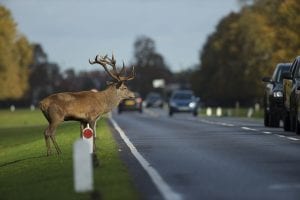