Two teenagers have been sent to prison for five years after admitting causing the death of a 17-year-old girl as they raced their cars.

Olivia Alkir, from Efenechtyd, Denbighshire, died after a two-car crash on the B5105 on 27 June.

She was a passenger in a Ford Fiesta which crashed at about 19:30 BST.

Thomas Quick, 18, from Clawddnewydd (pictured below), and a 17-year-old boy from Dyffryn Clwyd, both pleaded guilty to death by dangerous driving at Mold Crown Court. 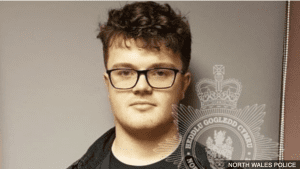