TfL and Met Police say tackling speed is a vital part of the Capital’s Vision Zero commitment after outlining a target to enforce up to one million speeding offences per year by 2025.

In 2021/2022, the Met enforced 476,685 speeding offences, 199,105 more than in the previous year. This represents a year-on-year rise of 72%. While praising the ‘huge strides’ made to date, the authorities hope to have the capacity to enforce up to one million speeding offences by 2024/25. Seb Dance, deputy mayor for transport, said: “Reducing danger on the Capital’s road transport network is a top priority, and lowering speeds is one of the most important things that we can do to make London’s streets safer.

“London has made huge strides in reducing road danger since adopting the Vision Zero goal for London and committing to eliminate all deaths and serious injuries from London’s streets by 2041, but there is still a long way to go.”

One way TfL and the Met are seeking to achieve that goal is through the installation of five new mobile safety cameras. TfL says the ability to relocate the cameras means that they can be used to target non-compliance ‘hot-spots’ and in areas where local communities are concerned about speeding on residential roads.

In turn, this ensures that TfL and the police can be more responsive to local community concerns and emerging problems. Since the new cameras have been in operation, the Met Police has used them to enforce 9,500 speeding offences, including one driver who was travelling at 90mph in a 30mph speed limit.

Siwan Hayward, TfL’s director of compliance, policing, operations and security, said: “We are taking robust action against drivers who continue to speed, putting themselves and others at risk on London’s roads. “This new equipment helps to increase levels and coverage of enforcement activity against speeding drivers across London. We urge drivers to slow down.” 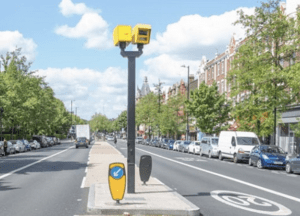