Warwickshire Police is raising awareness of the law on privately owned e-scooters – amid concerns over their illegal use on public roads, cycle lanes and pavements.

Under Government regulations, e-scooters are classed as ‘powered transporters’ – a term used to cover a variety of novel and emerging personal transport devices which are powered by a motor. This means anyone who uses a privately owned e-scooter on a public road or other prohibited space is committing a criminal offence and can be prosecuted.

The force adds the initiative follows an increase in complaints from the public, who have expressed safety concerns around the speed e-scooters are travelling and the legality of their usage. 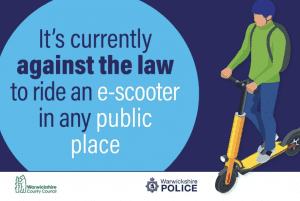