Authorities in Manchester are seeking permission for a mass trial of ‘non-prescribed’ zebra crossings on side roads, on the back of research showing they lead to a 65% increase in drivers giving way.

The two-year study was commissioned by Greater Manchester Combined Authority and conducted by the Transport Research Laboratory (TRL). It consisted of extensive consultation and off-road trials and concluded in 2021 with two on-street trials conducted by Tameside Council.

The trial results showed that the number of vehicles giving way to people on foot went up from four-in-10 to seven-in-10 – an increase of 65% – when the zebra markings were in place. The report also concluded that there is universal understanding, amongst all road users, of what zebra markings mean when used on side roads.

Andy Burnham said: “Every year in the UK, around two billion trips under one mile are made by car; the equivalent of a 15-minute walk or a five-minute bike ride. Those trips by car are releasing approximately 680,000 tonnes of carbon.

“In Greater Manchester we’re determined to shift the focus to become a city-region where walking, cycling and public transport comes first. That includes ensuring that people feel safe walking to school, the shops and work.

“The latest data we have has shown that 55 people in Greater Manchester alone have been killed at side road junctions on minor roads over a three year period. This is shocking and needs urgent action.

“We wanted to see if a method used widely across the world could offer us a practical and cost-effective option to make crossing side roads safer and, importantly, feel safer.

“I must give a special shout out to Tameside Council for their support in agreeing to do on-street trials last summer – it gave us the final piece of evidence we needed to demonstrate what happens on the ground when zebra markings are used on side roads and we hope it will give Government the confidence to conduct large-scale, long-term trials.” 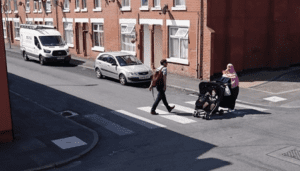